Many Medieval European rulers were believed to have miraculous healing powers, including the King’s Evil.

The House of Habsburg could kiss stuttering away.  The Monarchs of Castile could supposedly exorcise demons while their Hungarian counterparts, more prosaically, had powers over jaundice.  Meanwhile, English monarchs distributed cramp-rings, as a cure for “diabolical” sicknesses such as cramps and epilepsy.

Scrofula is the Latin word for brood sow; it’s the term applied to tuberculosis of the neck.

It was known as the King’s Evil (‘evil’ as in malady, the king’s as he was thought to be able to cure it) or, sometimes just ‘the Evil’.

Scrofula was thought to be caused by sin, especially the collective sins of the nation.

Perhaps because of this, the treatment was believed more likely to succeed if performed on a holy day.

The healing power was most noticeably exercised by monarchs who needed to demonstrate their reign’s legitimacy.

To the populace, it was proof of the king’s divine right to rule that he could channel the heavens.

James I of England, an intellectual, believed it was superstition and yet did it. Elizabeth I laid hands on more than a thousand subjects on one occasion.

The healing touch of some monarchs was well enough known for the afflicted to travel great distances including Russia and the New World to seek it.

Records show that some sufferers came repeatedly for the royal touch, proof that it had not worked the first time, the second time, or the third time.

Since the reign of Edward IV, monarchs presented the diseased with a gold medal called a “touch-piece” and hung it around the subject’s neck.

The diseased were instructed to wear the coins, known as angels, constantly to ensure success.

Some observers took the view that many of the ill came for the accompanying coin, not the touch.

The deeply cynical said that the petitioners were petty criminals who used the occasions for pickpocketing and worse.

Did the King’s Evil work?

Contemporary scientists, including some on the occult side of the table, tried without success to find an explanation for the effectiveness of the touch.

Of course, it’s possible that the disease went into remission on its own, giving the impression of a royal cure.

The mystique of monarchy was enhanced by the fact that monarchs never caught scrofula, even though they laid their hands upon their diseased subjects.

More than one king confided feeling the pressure of public expectation to his counselors or his day-books.

Luckily, Royal therapeutics were not expected to cure everyone immediately and those who remained ill were usually blamed for lacking faith!

One of Elizabeth’s royal chaplains, William Tooker, wrote “Charisma, or the Healing Gift” in 1597.

In a colorful passage, Tooker evokes the contrast between the pure, charismatic queen and her unfortunate, diseased subjects.

Tooker wrote that he had seen Elizabeth I with her :

“very beautiful hands, radiant as whitewashed snow, courageously free from all squeamishness, touching their abscesses not with fingertips, but pressing hard and repeatedly with wholesome results”.

Tooker, Elizabeth and others believed these healing acts were evidence not only of a special divine gift but also of the validity of her succession.

The demonologist Pierre de Lancre boasted that even dead French monarchs could heal.

It was still believed in the 16th century Saint Louis IX’s arm could still heal, preserved in Poblet Monastery in Catalonia.

By the middle of the 16th century those who wanted access to public healing had initially to undergo a medical examination by a royal surgeon to ensure that they did indeed have scrofula.

The ceremony was at its most popular during the Restoration, with Charles II touching an average of 4,000 people each year until the 1680s, when both he and James II administered some 6,000 a year.

These huge figures are even more astonishing when it is recalled that between 1530 and 1532 Henry VIII is recorded as having touched just sixty-five scrofulous sufferers.

Kings had no monopoly on curing Scrofula.

Sometimes the royal touch was the last resort for especially hard-to-treat cases.

John Morley describes in 1781 how he cured a young boy of this “grevious and obstinate disease”: 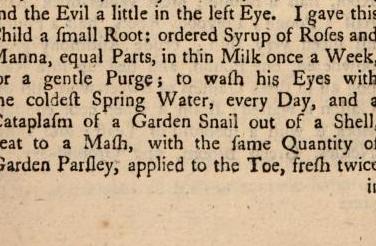 In the 18th century, Mrs. Elizabeth Pearson, an Irish herbalist, proposed a treatment for scrofula involving herbs, a poultice and extract of vegetable.

In the 19th century United States, Swaim’s Panacea was advertised as a scrofula cure.

The panacea contained mercury and Linton’s appearance above seems to show signs of mercury poisoning. Even though they brag that this is her “actual appearance” after being cured!

Siobhan is a freelance writer, research addict and lover of twisted history. If you like horrible but amazing history, check out her website www.interesly.com or Facebook page https://www.facebook.com/interesly. Or you can reach her through www.siobhanoshea.com.

From Gods and Devils to Lolcat : History of the beloved cat

Twitter tries to fix the malfunctioning cyborg that is Donald Trump

We use cookies to ensure that we give you the best experience on our website. If you continue to use this site we will assume that you are happy with it.Ok