What sort of a man was the Medieval executioner? How did people in their communities feel about them? Was their job well-paid?

For many a Medieval executioner, his career recruitment boils down to “wrong place, wrong time”

Sometimes people would be forced into the profession of executioner, if the local ruler or city authorities needed an executioner and there wasn’t one handy.

Heinrich Schmidt’s recruitment went like that. A medieval Bavarian prince faced a dilemma of two peasants to execute and no-one to do it. He picked out Heinrich Schmidt in a crowd : You! You are going to hang these guys!

When Heinrich refused, the prince pointed out the alternative – Heinrich and the two people beside him would be hanged too.

So Heinrich did it. And once he did it there was no other job. Nobody wanted to have anything to do with him. He and his children were condemned to be executioners.

In other places, it was a job they put out and allowed applicants for, but it was often not popular.

In 15th century Metz, applicants were sought, but eventually, it was forced on a man banished from the town, in return for a pardon.

Not long after he had taken a job, another person turned up who had travelled to apply for the position!

In the 17th century, in particular, it became very difficult and to recruit executioners.

In Sweden, the practice of postponing the execution of a prisoner on death row in exchange for service as executioner was introduced.

If a prisoner accepted, his ears were cut off and he was branded with the seal of the city.

Oftentimes the first act of the new executioner was to execute the previous one!

In quite a few places, executioner became an inherited job, since the son of an executioner had no other option but to continue in the family profession.

In France, the two most famous executioner dynasties were the Samson (one of them cut King Louis XVI’s head), and the Deibler (and they were related). 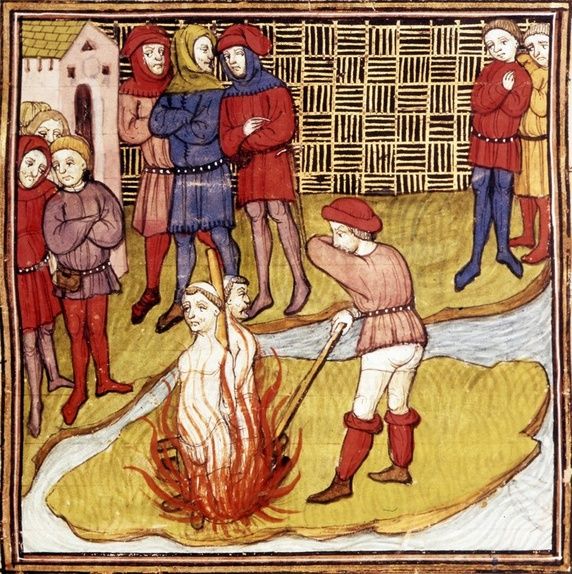 Historically, executioner has been an “unclean” occupation.

In ancient Rome, the carnifex, or public executioner, was not permitted to live within the city limits, but rather lived near the Sestertium, the area where slaves were punished and tortured.

In Spain the executioner was ritually untouchable, and executioners were made to paint their houses red and wear a symbol of the gallows on their clothing, as well as ritually confess to each killing in court.

They were typically denied citizenship in their own towns and forced to live in undesirable areas.

In Germany, executioners’ houses were painted in a distinctive yellow colour to avoid the possibility that someone might accidentally knock on the door.

Most churches and pubs would not let an executioner in unless they had a special seat apart from the others.

Pubs that were willing to provide a seat for the executioner had a special glass chained to the table.

If they had to repair the gallows, workers underwent a cleansing ritual.

In 1500 a Strasbourg ordinance ordered that the executioner behave modestly, make way for honourable people in the streets and refrain from touching food in the market unless willing to buy it.

He was required to stand in a separate place in church and forbidden to approach citizens or honourable people in taverns.

The Bamberg criminal code of 1507 went even further, indicating that an executioner paid ad hoc for each act or torture or execution would not receive communion because a system of individual payments would induce

At the imperial level, the police ordinance of 1530 listed executioners together with prostitutes and Jews, prescribed special clothing for them so they could be clearly identified.

In Finland, executioners were allowed to wear very flamboyant clothes only on special days.

This is where we get the uplifting saying “dressed like an executioner on easter”!

The civic code in 1276 Augsburg describes the executioner as a civil servant with clearly defined rights and duties.

For beheadings and hangings, he received five schillings. In addition, he was given everything the convict wore below the belt.

He was to supervise public prostitutes and to arbitrate any conflicts that might arise between them and citizens. They were to pay him two Pfennig every Saturday, but he was “not to demand more”.

He was also required to guard grain stored in the market place, for which he received a measure of corn, and to judge the quality of milk sold at market.

He was to drive lepers out of town, for which he was paid five schillings every time a tax was levied and to expel prostitutes who did not conform to the local rules of trade.

In the imperial cities, job security was good and averaged about 24 years, much longer than in the communities or villages.

As part of his compensation, the executioner was often given a house.

In Paris, the executioner could take a handful of every load of grain brought into the market.

However, to preserve the grain from his unclean touch, he had to use a wooden spoon!

Besides the personal property of the condemned, he received rents from the shops and stalls surrounding the pillory, in which the retail fish trade was carried on.

The executioner basically held a monopoly on services related to the dead.

Executioners made money on building gallows, disposing of the corpses of suicides (which could not be buried in a Christian graveyard), and performing some medicine.

The executioner’s symbolic role as one who was licensed to kill was offset by his role as a healer.

The very man whose official function was to kill and maim spent much of his time “off duty” practising medicine.

Franz Schmidt (son of Heinrich) who personally executed 361 people (while keeping a journal) acted as physician to over 15,000 others.

Executioners practised medicine in the homes of patricians and aristocrats, and at the courts of territorial lords.

Executioners’ power to heal ran in families and they occupied a sanctioned niche as hereditary healers in the medical infrastructure of the early modern German town.

Their craft required a certain knowledge of human anatomy. They had a far greater opportunity to study the human body than university-trained doctors.

Executioners derived many ingredients for their medicines from the bodies of executed criminals – blood and human fat used to cure a variety of aliments such as epilepsy, broken bones, sprains or crippling arthritis.

Sometimes—and this is really macabre — executioners would get paid to torture somebody and then get paid to heal them.

Were Medieval executioners a bunch of sadists?

The executioners of the Middle Ages were not necessarily driven by sadistic impulses.

Torture and gruesome executions were designed in part to ensure the salvation of the convicted person’s soul.

A German researcher points out that :

Besides, medieval criminals were hardly ever caught.

Medieval and early modern authorities felt compelled to rely on self-recrimination and torture to get evidence.

The incontrovertible truth was extracted from the accused with every means possible, which included tying him to the so-called dry rack and painfully stretching his body.

They even used psychological tricks to extract information. One was the use of the so-called Bahrprobe, in which a suspected murderer was forced to kiss the wounds of the murder victim.

The culprits were to be confronted with the consequences of their disgraceful deed – and would then hopefully break down and confess.

Far from wallowing in sadism, people attending an execution reacted angrily to an executioner allowing the condemned criminal to suffer unduly.

In some German towns, an executioner was permitted three strikes before being grabbed by the crowd and forced to die in place of the poor sinner.

In 1575, a drunken executioner in the Swiss canton of Graubünden was stoned to death by an audience disgusted with his lurching attempts to behead three criminals!

Overall it seems that the position of executioner went from an “untouchable” one to a part of the civil service.

I recommend the journals of Franz Schmidt, who kept a fascinating account of each of his 361 executions.

He may have started the journal as a resume, but he continued it as evidence in a petition to the Emperor to redeem Franz’s family honor from the disgrace forced upon his father.

The petition succeeded late in Schmidt’s life and his son was allowed to become a physician.

Siobhan is a freelance writer, research addict and lover of twisted history. If you like horrible but amazing history, check out her website www.interesly.com or Facebook page https://www.facebook.com/interesly. Or you can reach her through www.siobhanoshea.com.

How Monopoly was a secret weapon in WWII

Watching The Exorcist again this Halloween? 11 frightful facts to creep you out

We use cookies to ensure that we give you the best experience on our website. If you continue to use this site we will assume that you are happy with it.Ok